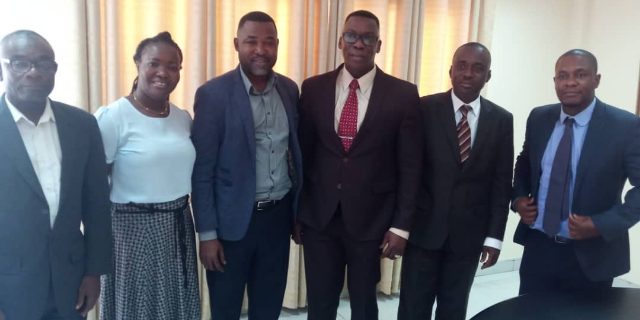 The leadership of transport unions has endorsed the initiative by the insurance regulator to implement an electronic insurance database, to check the menace of fake insurance stickers.

The Driver Unions who were moved by their excitement at the news, recently paid a courtesy call on the Commissioner of Insurance at the National Insurance Commission, to find out more about it.

The Union Executives led by Mr Francis Sallah expressed their delight at the move as it has been the headache of the national leadership of the General Transport, Petroleum and Chemical Workers Union (GTPCWU) of the Trades Union Congress (TUC) when their members fall victim to this menace due to fake insurance stickers.

He bemoaned the situation where some of their unsuspecting drivers were cowed into purchasing cheap motor insurance with stickers which looked exactly like the originals.

File photo: Accident involving a truck on the N1 Highway.

Reality dawned on these drivers only after they were involved in accidents that warranted a claim which was refused to be honored by the Insurance Companies they were purported to have insurance cover with.

In his response, the Commissioner of Insurance and the Chief Executive Officer of the NIC, Justice Ofori, expressed his appreciation to the leadership of the GTPCWU (TUC), (which is a key stakeholder in the motor insurance space) for such endorsement and saw it as a national embrace of a policy that would help everyone including ensuring the livelihoods of families of accident victims are not curtailed.

The Motor Insurance Database which would be implemented in the first quarter of 2020 will provide a centralized database from which security agencies and the general public including passengers of commercial vehicles can check the validity of an insured vehicle on the spot.

The checks may be done through either a mobile app, a text message or by scanning a code on the insurance sticker. He also stated that the NIC is collaborating with the Driver And Vehicle Licensing Authority (DVLA) and the Police Motor Transport Traffic Department (MTTD) to enable a smooth rolling out of the programme.

In an earlier interview with some victims of fake insurance and non-insurance, Ms Doreen Dodoo, a Teacher shared her experience on how the nation should embrace this move by the NIC that would inure to the benefit of all.

According to her, she was due to renew her motor insurance policy after a year of cover only to be told by the insurance company that she had no cover the previous year.

Upon investigations, it was revealed that indeed she had paid her premium alright but the money was clipped to the counterfoil of her receipt and still lying in the drawers of the Agent who had done the policy for her but failed to have the records of payment updated, she narrated.

“Imagine if anything had happened to me during that period that I was told I didn’t have cover even though I had proof of that. I would have been a victim without any compensation and it is my family that would have been at the receiving end of the consequences of the bad nuts who are perpetrating this menace,” she stated.

Another victim, Mr Christian Bruce also shared his experience and expressed his excitement at the MID policy by the NIC.

According to him, he was ran over by a commercial vehicle and suffered serious head injuries but was told later that the vehicle that knocked him down had fake insurance and for that matter, there was no compensation for him from the insurance company.

He gave his backing to the Motor Insurance Database which he indicated, would make it easy for a motorist to tell at first hand through a mobile phone alert, the moment he or she purchases insurance.

“If this had been in place earlier, I don’t think I would have gone through this hell,” he lamented.

Some driver union leaders and drivers at the 37 and Achimota transport terminals also shared similar experiences and expressed great joy and indicated they cannot wait for this to happen as planned by the NIC as they admonish their colleagues across the country to beware of cheap insurance premiums.